The winner was the Colombian Egan Bernal. It was a great team performance, from the start and flat stages Filippo Ganna, Jhonatan Narváez and Salvatore Puccio controlled the race. Gianni Moscon, Jonathan Castroviejo, and Daniel Martinez took him a few kilometers before the end in the mountain stages. Unfortunately, Pavel Sivakov crashed out on stage five, leaving the team with one less.

Since the first week of the race, Egan did his move and went to the classification top. He was able to follow his rivals when they attacked, keeping their hard steady pace, he let his teammates do their job, and with his team, he could keep the pink and white jersey till the end.

It was also a surprise for Damiano Caruso, finishing second on the podium. He dedicated his entire carrier to ride for others, he won also a stage, his third win as a pro, and his first in the world tour. He had been impressive. Third, Simon Yates had bad days in the first two weeks but rode bravely in the last week of the race. He also won a stage. Peter Sagan (Bora–Hansgrohe) won the maglia ciclamino.  Geoffrey Bouchard (AG2R Citroën Team) the azzurra. 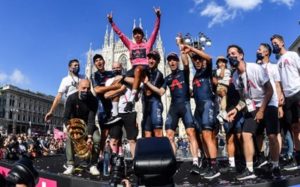 Learn about events, contests, designing tips and more? Of course you do!